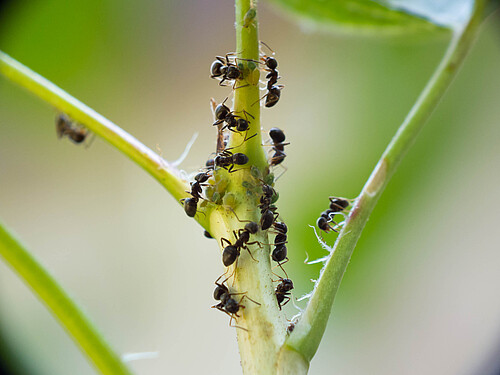 Cracks in house walls, outside in the ground

Hollowing out/erosion of pavement and terraces, pesky due to home invasion

Ants are among the most common insects in the world, both in terms of the diversity of species and the individual creatures themselves. From the approx. 8,800 species of ants in existence, most are found in the tropics and subtropics. Very high population densities can be reached, above all, in the tropics. Approx. one-third of animal biomass in the Amazon rainforest is made up of ants. Only around 180 species of ants exist in Europe. Nevertheless, ants play an extremely important role in our ecosystem. Ants distribute nutrients in the soil, destroy but also spread harmful insects, and they are a source of food to many other animals, but above all, birds. Finally, ants that invade homes can be extremely annoying.

Ants have a distinctive look with a triangular head and large abdomen. All ants have bent antennae consisting of a long basal segment and a segmented end.

Ants, like bees and wasps, belong to the Hymenoptera order of insects. It’s characteristic for ants to have a high degree of social organisation. Ant colonies consist of different groups which can be distinguished by their physique and behaviour: fertile females who only have wings during certain periods, winged males, sterile wingless females (the workers) and the queen. Only the queen produces eggs in an ant colony. The countless number of female workers takes over all other tasks, such as building the nest, defence, finding food and taking care of the brood. Males are only meant to fertilise the queen and have a short life. Winged females and males, which differ in appearance and size, exist only briefly. After mating, they shed their wings and build new ant colonies. As a general rule, it is only the wingless female workers that are visible to us as they busily forage for food, even further away from the immediate vicinity of the nest. From among all other insects, ants have the most advance form of communication through pheromones. Ants leave behind a trail of pheromones leading to a food source. These pheromones are secreted from special glands. The scent trail provides information about the quality and location of food. Ant trails form along these deposited scents. If food is found in liquid form, ants carry it back in their so-called ‘communal stomach’. Solid food, for example, a caterpillar which has been caught, is either taken back to the nest in one piece or multiple pieces by one or several ants. Solid food must be chewed by larvae first before the adults can consume it. This ensures that food is distributed throughout the colony starting with the brood (larvae) all the way to the queen.

Native species of ants spread aphids to collect their excrements which are rich in sugar. Ants stand out as a nuisance when nests are built on lawns or between the cracks of stones on terraces. Ants can also invade kitchens, pantries and warehouses when foraging for food. Bacteria and spores can spread by walking on food. Ants which invade balconies, terraces and homes are usually black-grey garden ants (Lasius niger) or brown wood ants (Lasius brunneus). The pharaoh ant (Monomorium pharaonis), which was introduced from abroad, is a hygiene pest. It eats albuminous substances and can cause serious hygienic problems in hospitals if it penetrates wound dressing materials. Fighting this species of ant is difficult and should only be carried out by professionals.

The black-grey ant often loses its way in homes, especially in the early spring when food supplies are scarce. Nests are not built in houses. The female workers of this species of ant measure 2.5 mm up to a little over 4 mm long and their bodies are a uniform black-brown colour. The antennae are a yellow-brown colour at the base. The brown wood ant can sometimes build its nests in rotten wooden beams and can thereby damage other areas of wooden structures. That’s why this species of ant is labelled a ‘material pest’. The brown ant is slightly smaller than the black-grey garden ant. The chest, legs, antennae and jaw are all yellow-brown in colour. The head and abdomen are darker. Both species of ants eat mainly food containing carbohydrates.

If ants have invaded homes, the first step is to look for their access point into the home. Further invasion can often be avoided by sealing up cracks and gaps.

Setting up ant bait stations which contain insecticides is targeted method of control. Ants collect the bait containing carbohydrates and carry it into their nest to feed to other ants, including the brood and the queen. The insecticidal active agent is spread in such a way that the effect is delayed to ensure the active ingredient is disseminated, so that the entire nest is attacked and not just individual ants that can be quickly replaced.

Powder can be used on pavement and terraces to combat ant trails or poured on an entire nest as a liquid treatment.

For fruit and ornamental trees