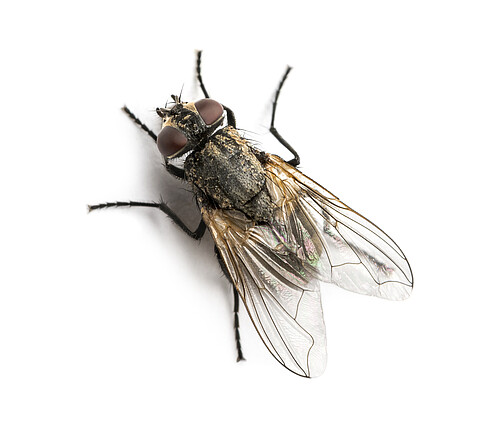 Up to 500 eggs; multiple generations each year

Transmission of germs to food and contamination by laying eggs

In comparison to other insects, flies stand out because they have a pair of wings. The hindwings, known as halteres, are club-like in shape and are used for flight balancing. The wings can be moved very quickly by means of a special mechanism, the indirect flight muscles, which exploit the tension of the insect's exoskeleton. As a result, flies can carry out impressive flying manoeuvres.

There are more than a thousand species of fly. Flies count among the biggest pests for humans and animals. Flies are also important from a point of view of health. It’s been proven that flies carry many parasitic worms, pathogenic germs, and that they are the cause of typhus, cholera, tuberculosis, anthrax and polio. Flies, however, also have an important place in the ecosystem. They are a source of food for many other organisms and play a significant role as pollinators.

The most common species in households is the common housefly (Musca domestica). Common houseflies measure between 4 and 7.5 mm long and can be told apart from other types of household flies by the veins in the wings and four stripes on the bottom of the abdomen. The mouthparts of common houseflies transform to proboscis so that only liquid food can be consumed. Solid foods are broken down by saliva.

Common houseflies live in cities and can be found anywhere human beings are, depending on the climatic conditions all year round or only in the warm season. Under favourable conditions, houseflies can go from an egg, through three wingless larval phases (so-called white maggots), diapause (pupation) and develop into a finished fly all within a period of two weeks. Flies have the capability to reproduce in great numbers due to the short generation period. Up to twelve generations can develop in one summer. A female can lay up to 500 eggs during her life. A clutch of eggs contains approx. 50 to 75 eggs. Depending on the ambient temperature, household flies can live to be over one-month old, but those that hibernate over winter can grow to be much older.

Flies are active during the day and find their way mainly using their eyes, which are very big compared to their head. Their eyes allow flies to have a 360-degree view. As is the case with all insects, the eyes are composed of many tiny lenses (compound eyes). The temporal resolution of the eyes is much greater than in vertebrates which also allows flies to react faster. Flies are attracted to light in the wavelength green and red, but also to the range in contrast between light and dark. They also perceive light in the ultraviolet range. Contrary to moths, for example, which use airborne signalling substances (pheromones) to communicate over long distances, chemical substances only play a role for flies at short distances. Instead, flies haphazardly discover their environments.

Flies not only bother humans and pets, but due to their habit of landing on food as well as on waste and faeces, they are also transporters of germs and parasites which can sometimes be dangerous (see above).

Manure, in particular, is often a site of infestation in rural areas. Flies also seek out rubbish bins and decaying lawn cuttings.

Large adhesive traps that are imprinted with shapes and colours are effectively used in stables to attract and trap flies. Insecticides can also be applied over a large area. Beneficial insects are also used in stables to fight flies. The predatory larvae of manure flies eat the larvae of common household flies. Decorative glue trap for catching flies on the window

With flexible head, no marks left on the wall if used properly 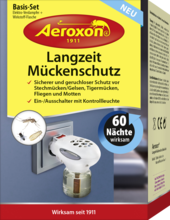