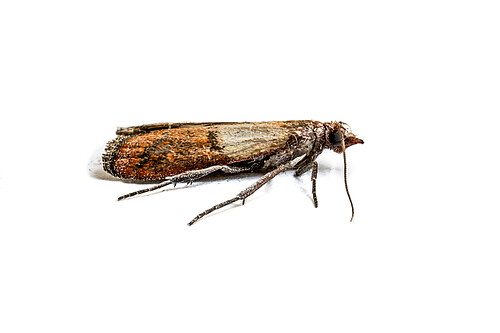 Detection and decimation through pheromone traps, destroying infested food and disinfecting the cabinet

Moths belong to the largest insect order of butterflies (Lepidoptera = ‘scaled wings’), of which there are around 150,000 species worldwide. It’s common for all butterflies to go through desquamation (in particular, their wings) and to go from wingless caterpillars through the pupal period to a fully grown butterfly. The systematic classification of butterflies is scientifically controversial; for the sake of simplicity, butterflies are often divided into butterflies and moths, or small butterflies and large butterflies.

Small butterflies or moths, which are important in households as storage pests, belong to the pyralids (Pyralidae). Pyralidae are relatively small and inconspicuous and are active mainly at dusk. Mature moths have a short lifespan of often only a few days and do not consume any food but only water. Damage is caused by larvae (caterpillars). Development from an egg to multiple moulting stages and pupation can take several months depending on the ambient temperature.

Since all species of moths communicate with each other through species-specific airborne scents (pheromones), it’s possible to use synthetic moth pheromones to attract sexually mature moths to adhesive traps in order to detect a possible infestation. In general, only males are attracted to the traps. Pheromones, which are only released in very small amounts, are harmless and cannot be noticed by humans.

These are the moths which are also known as ‘food moths’. The Indian mealmoth (Plodia interpunctella) is the most important storage pest in domestic households in Central Europe. The larvae of Indian mealmoths have a very broad range of food, spanning from cereals to dried fruits, nuts, seeds, legumes, chocolate, cocoa, coffee, tea and spices. The species probably originate from West Asia but were spread with the trade of goods worldwide.

The front wings of moths have a wingspan of 12 to 18 mm. They have a distinct-looking pattern and reddish-brown tips. Moths mate shortly after hatching from the puparium. Female moths attract male moths with airborne sexual attractants (pheromones) which are released from special glands and which males perceive using special receptors on their antennas. Females lay 100 to 400 tiny eggs on suitable substrates or also on the outside of food packaging. The yellowish-white larvae that hatch go through several moulting stages and cause direct damage to food by contaminating it with faeces and also webs. At an ambient temperature of 20°C, the larvae measure 14 to 17 mm after approximately 6 weeks and leave the food source for pupation. The pupae can remain dormant at unfavourable conditions for several months, such as with cold temperatures, bright conditions, or high pupa density.

Preventive measures include the airtight storage of food which is at risk of being infested. Cleaning away small amounts of spilled foods, such as traces of flour, also helps because the tiny caterpillars which hatch need food immediately and starve to death very quickly. However, food can be contaminated with eggs or larvae already upon purchase.

If an infestation is discovered, the infested food must be removed immediately and the surrounding area carefully examined for other signs of moths. Only when all the eggs and larvae are removed can a new infestation be prevented.

Pheromone traps successfully attract male moths and trap them on an adhesive surface to determine whether there is an infestation of Indian mealmoths. The capture of sexually mature males also automatically results in a reduction of the moth population. The actual effect is, however, that the artificial pheromones used cover up the scent of the naturally released pheromones and make finding breeding partners more difficult by confusing the moths. As a result, this prevents further generations of moths and thereby reduces the moth population.