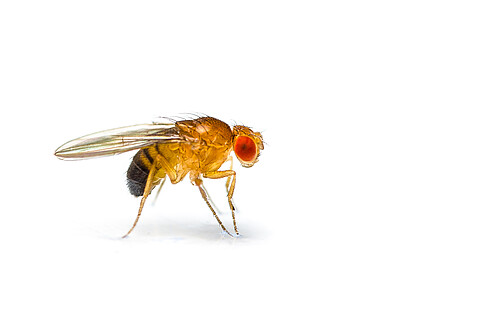 Up to 400 eggs; multiple generations each year

Prevention: Do not leave ripe fruit lying around; for the targeted detection and localisation of an infestation: Fruit fly traps

The fruit fly is also referred to as the common fruit fly or vinegar fly. Like the housefly, they also systematically belong to the order of Diptera, meaning that in comparison to other insects, they have a pair of wings. The wings can be moved very quickly by means of a special mechanism which exploits the tension of the insect's exoskeleton, and therefore makes them capable of carrying out fantastic flight manoeuvres.

Fruit flies are small flies measuring two to six millimetres in size. There are more than a thousand species, with approx. 50 of these species existing in Central Europe. Their natural habitats include wet forests or forest edges. As an anthropophilic species, they frequently invade human homes.

The most common species frequently found in houses is the black-bellied fruit fly (Drosophila melanogaster) which has spread throughout the world. It has been used as a research subject for genetics and is probably the best-studied organism in the world. It is about three millimetres long and has strikingly red eyes.

Females lay up to 400 eggs measuring half a millimetre in size on fruit and decaying, fermenting organic material.

The development time depends on the ambient temperature. A worm-like maggot can hatch in just under a day at 25°C. They predominantly eat microorganisms, such as bacteria and yeasts, and only secondarily from fruit itself. After a few days going through three stages as a maggot and then as a pupa, they hatch into a full insect with the ability to fly.

Fruit flies are active in the day and use their eyes and chemical sense to find their way. They are attracted to decaying fruit and the fluid residues in open containers. They then feed off their fermenting substances as described above. Thus, they can become very annoying, particularly in autumn, when large populations have amassed throughout the summer and there is a lot of rotting fruit around.

Ripe fruit should not be left lying around as a method of prevention. Fruit flies can reproduce in large numbers in compost bins, too.

Fruit flies can be combated using various measures. It is hard to prevent fruit flies from entering buildings using mechanical barriers (fly screens) since the mesh netting is generally too large in order to allow for proper air circulation. Fruit flies can be caught in adhesive traps. These traps take advantage of the effect fermenting substances have on attracting flies.