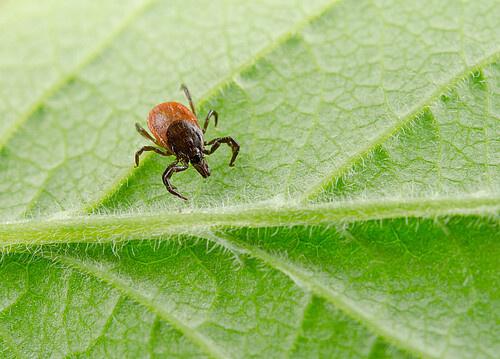 Before a meal 4 mm, after sucking blood up to 3 cm, larva stages significantly smaller

In dense vegetation up to 1.5 metres high. Not active during cold periods of the year

Transmission of serious diseases, such as meningitides (TBE), borreliosis and rickettsioses

Avoid straying into areas of thick vegetation, wear clothes that cover the body, inspect the body for ticks, use insect repellents, remove ticks as quickly and correctly as possible after they have bitten

Like mites, ticks belong to the class of arachnida (unlike insects, ticks have eight legs as adults and never any wings).

Most tick types are ectoparasites, meaning that they live on the outside of its host. The hosts are usually vertebrates. Ticks are important carriers of disease due to their parasitic lifestyles.

The most common medically important species of tick in Europe is the common woodbuck (Ixodes ricinus). This species of tick measures only a few millimetres, up to a maximum of 4 mm. Like all but one of our native species, it belongs to the group of hard ticks (Ixodidae) which have a hardened body armour made of chitin. As with all ticks, their abdomen is extremely flexible.

Ticks prefer a high level of humidity and heat. At temperatures below 7°C, ticks are not active but enter into a state of brumation. Most ticks die in cold winters. Ticks survive in mild winters and as a result, there are lots of ticks in the following summer. Drought, however, also restricts the development of a population.

Ticks lay packages of eggs on the underside of grass blades. The six-legged larva hatch from the eggs looking for a suitable host, for example, a rodent. They then bury themselves firmly into their hosts and then fall off after a few days. After a few months, the larva hatch into eight-legged nymphs who look for a larger host, such as a cat. After sucking blood again, the nymphs shed their exoskeleton to form a fully developed adult and then look for a new and even larger host, for example, a person. Temperature-dependent diapauses may be taken between the individual development steps. After the last blood meal, the tick detaches from the host to find a partner for mating. Female ticks die after oviposition; male ticks die directly after copulation.

Both males and females need blood to feed. Females are dependent on large quantities of blood to develop eggs.

Ticks are usually active from March to October. They hide in vegetation and then attach to a potential host. With the help of a chemoreceptive organ (Haller's organ), ticks can detect ammonia, carbon dioxide, butyric acid and other volatile substances that are released with the breath and sweat of a potential host. Light/dark contrasts as well as vibrations help ticks identify victims. Ticks often crawl for several hours on a human or animal before biting. They prefer spots with thin skin. For humans, this is usually the groin and knee pits.

Ticks pierce skin using a pair of ‘jaw-like appendages’ (chelicerae) attached to their mouthparts and insert a ‘stinging device’ (hypostome) which is equipped with barbed hooks into the wound. Colloquially, the term ‘tick bite’ therefore really does refer to the bite of a tick then. In contrast to mosquitoes, they do not pierce blood vessels but only lick up outflowing blood, lymph and decomposing tissue. Ticks deposit a secretion which contains a coagulation inhibitor to prevent its stinging device from getting stuck. A certain kind of ‘cement’ is also deposited with their saliva to anchor their mouthparts in the skin. Ticks release anaesthetic substances to remain undetected and an anti-inflammatory agent to prevent the host from having an immune reaction.’

Ticks can suck blood for several days before detaching from a host. In extreme cases, ticks can consume 200 times their body weight in blood and multiply in size.

Ticks also stick to the skin of their victims using their claws. The claws contain the protein resilin which allows them to have a very good grip. Experiments have shown that female ticks can stay glued to glass surfaces with a force equal to 500 times their body weight.

Ticks can carry serious diseases such as borreliosis, meningoencephalitis (TBE) and rickettsioses. The areas with tick populations, which can be carriers of TBE, have grown considerably in recent years.

The pathogens are located in the intestinal tract of the ticks and are usually released only a few hours after the start of the suction process. Quickly removing ticks therefore significantly reduces the risk of infection.

It’s recommended to avoid straying into areas of thick vegetation. Clothes that cover the body also provide a certain degree of protection from tick bites. Inspecting for ticks after spending time outdoors is an important preventive measure. Insect repellents can protect against tick bites for a limited period of time. Removing ticks as quickly and correctly as possible after being bitten can considerably reduce the risk of infection, since the germs which are found in the intestine of ticks are released with their saliva when blood has already been digested.