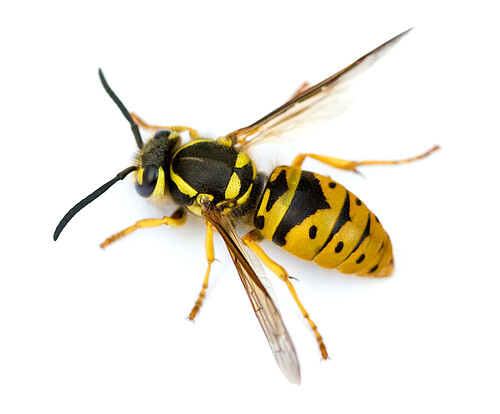 Colonies in summer with up to 1,000 female workers, only the queen survives the winter

In addition to bees and ants, wasps belong to the species Hymenoptera.

The common wasp (Vespula vulgaris) and the German wasp (Vespula germanica) are the most common indigenous social wasps (Vespidae), and they can be recognised in general through their distinct-looking yellow-black bodies. Wasps have a stinger which is used to defend themselves and paralyse insects they’ve captured. Just as bees, wasps form a colony to divide up work, namely between the reproductive female (Queen), sterile workers and males. In contrast to bees, however, the colony only exists during warm months of the year and dies in winter. Only queens survive and form new colonies the next spring. In the course of the summer, they grow in nests which have a paper-like structure. Fine wood shavings and saliva are used as building materials. Nests are built under ground out in the open. In houses, nests are found in dark areas, for example, in attics or roller shutter boxes.

Humans only notice wasps when they’re looking for food containing sugar. The reproductive females and the males require sugar in particular.

Over five larval stages and a pupal stage, eggs develop into completely developed insects within three to six weeks.

Wasps in search of food can be a big nuisance, especially in the case of a strong increase in numbers. When threatened, wasps can sting. This often happens when they are unintentionally touched, for example, when they are sitting on food or drinks. The sting hurts and in certain cases, for example, can also be dangerous to people who are allergic or stung in their mouth area.

Large quantities of wasps can be caught in cup traps filled with fluid. Adhesive traps are also suitable for catching them. Individuals can also be combated with insecticide spray. In some cases, it makes sense to remove the nests.