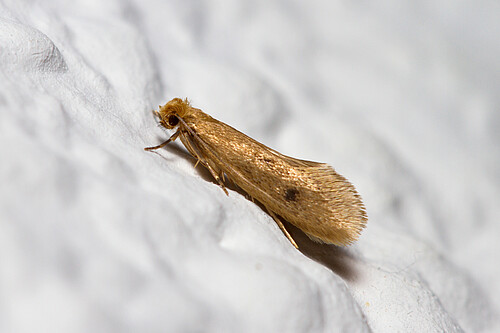 From egg to moth in 200 days (at 15°C), higher temperatures shorten the development process

Up to 200 eggs; frequently two generations per year

Holes in clothes and furs cut away by caterpillars, cotton items can also be damaged

Moths belong to the largest insect order of butterflies (Lepidoptera = ‘scaled wings’), of which there are around 150,000 species worldwide. It’s common for all butterflies to go through desquamation (in particular, their wings) and to go from wingless caterpillars through the pupal period to a fully grown butterfly. The systematic classification of butterflies is scientifically controversial; for the sake of simplicity, butterflies are often divided into butterflies and moths, or small butterflies and large butterflies.

The small butterflies or moths, which are important in households as material pests, belong to the real moths (Tineidae). All types of moths share the similarity that they are relatively small and inconspicuous as adult insects, and are mainly active at night or at dusk. Mature moths have a short lifespan of often only a few days and do not consume any food but only water. Material damage is caused by larvae (caterpillars). Development from an egg to multiple moulting stages and pupation can take several months depending on the ambient temperature.

Since all species of moths communicate with each other through species-specific airborne scents (pheromones), it’s possible to use synthetic moth pheromones to attract sexually mature moths to adhesive traps in order to detect a possible infestation. In general, only males are attracted to the traps. Pheromones, which are only released in very small amounts, are harmless and cannot be noticed by humans.

The clothes moth (Tineola bisselliella) is a pest that exists around the world and attacks textiles, carpets, furs, museum exhibits and other materials containing at least 20 per cent fibre of animal origin. To develop, the moth needs the protein keratin which is contained therein. Textiles which have been completely made out of plant fibres or synthetic fibres can also be damaged. Moths develop in birds’ nests out in the open. In modern, centrally heated apartments, the clothes moth is the most common textile pest since it can handle dry environments unlike other species.

Moths have a wingspan width of 12 to 16 mm. The front wings are bright golden yellow colour and the rear wings are a grey-yellow colour. The female moths are poor flyers but can run quickly. A female lays up to 200 oval-shaped eggs measuring 0.6 mm in length. The larvae are up to 10 mm long and are yellowish-white colour with a brown head. They spin a quiver which is open on both sides and attached at the base (in contrast to similar case-bearing clothes moths [Tinea pellionella] whose quiver is only open on one side and carried by the larva). Larva require temperatures ranging between 10°C and 33°C to go through multiple moulting stages. The entire development process takes 200 days at a temperature of 15°C and 70 days at 30°C. Depending on the ambient temperature and quality of food, the development can take up to two years.

Moths damage textiles by eating holes through them. In the case of fur, they feed on hairs at the base of fur.

Moths prefer attacking textiles which have been in storage for a long time. That’s why regularly opening and airing out clothes chests is a good preventative measure. Washed or dry-cleaned textiles should only be put away in storage. Scents from sweat, etc. attract moths that are ready to lay eggs.

Infestation can be reliably prevented by using insecticide-based moth control products in wardrobes.

Natural essential oils, such as lavender oil, also help prevention since clothes moths are deterred by these substances. Pheromone traps can help determine if clothes moths exist and also help to pinpoint the infestation.

To successfully combat moths, it’s important to find and treat the whole infestation. The treatment is done using either an insecticide-based moth control products or with insecticide sprays with residual effectiveness. Close attention should, of course, be paid to the instructions.

Storing infested fabrics at -20°C for several hours kills all development stages of clothes moth. Airing clothes outdoors is also effective because exposure to the sun can kill off the eggs.

Immediate extermination of clothes moths, fur beetles and their larvae 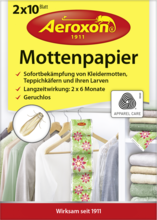 Effective control of clothes moths, carpet beetles and their larvae