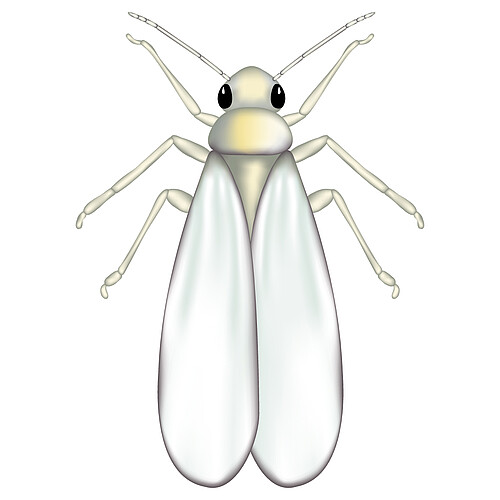 4 to 7 eggs in summer, one generation every 25 days in warm

Despite their name, whiteflies (Trialeurodes vaporariorum) are neither flies nor moths as their appearance might suggest. Rather, like aphids, they belong to the systematic group of plant suckers (Sternorrhyncha) and then to the whitefly family (Aleurodina). Whiteflies are 1 to 2 mm long and completely covered in white wax. When it is at rest, the two uniform pairs of wings are folded over the back like a moth, hence the moth-like appearance. The wingspan width measures 5 mm. Whiteflies usually sit in large numbers on the underside of soft leaves and when disturbed fly away only to soon resettle on the plant again. They are also capable of jumping.

Whiteflies are originally from Central America, but can now be found on crops worldwide. They prefer attacking the following indoor plants: Azalea, regal pelargonium, blue asterisk, heliotrope, fuchsia, sword fern and also orchids. Cucumbers, tomatoes and lettuce, above all, are infested in greenhouses. The whitefly’s tiny eggs (0.1 mm) are a pale yellow and turn dark brown later on and are firmly planted in plant tissue. The females lay 4 to 7 eggs per day in summer. The larvae that hatch from these eggs are agile at first, but form legs and feelers during later moulting stages in order to be sessile. The larvae are oval, flat, a yellow-green colour and covered with wax excretions. The winged whitefly then hatches from a pupal case which is covered in bristles. The development time is strongly dependent on the temperature. Generations hatch every 60 days at 16°C, at 24°C after only 25 days. Whiteflies can also multiply asexually (parthenogenesis).

Whiteflies suck on leaves at all developmental stages, leaving the leaves spotted and dry in the case of a heavy infestation.

Insecticides are used to fight against whiteflies in professional crop farming. Adhesive traps are also used to catch large numbers of whiteflies or to determine the progress of the infestation by regularly counting the captured insects (monitoring). The adhesive traps are yellow in colour because the whiteflies are attracted to yellow. Non-toxic and ready-to-use glue trap for the control of harmful flying insects on indoor and balcony plants.

Special, non-toxic glue that will not dry out